Nick Avocado Before and After: Was He Skinny and What Is His Weight?

Before Nick Avocado embarked on his food challenge, he weighed just 150lbs and looked very trim and healthy. However, the consumption of daily mukbangs has increased his body mass to 350 lbs, and some sources claim he has already hit 370lbs.

The YouTube celebrity, who is still a young man, started binge eating in 2016, and within six years, he is completely unrecognizable. Fans concerned about the implications of his excessive weight gain have warned him to desist from overeating, but he seems unconcerned.

How Much Does Nick Avocado Weigh?

As of 2022, Nick Avocado’s weight is about 350 pounds, equivalent to 159 kilograms. Before he took to gulping down large quantizes of junk food on his YouTube channel, the American internet star said he only weighed about 150lbs or maybe 160. By the time he started Mukbanger, he had massively gained body mass.

Nick’s weight was already double by the time he hit 300 lbs, but that didn’t stop him from gaining more weight. The American YouTuber has gained additional 200lbs since he launched his food-eating career on the internet, but his height remains 5 feet 7 inches. 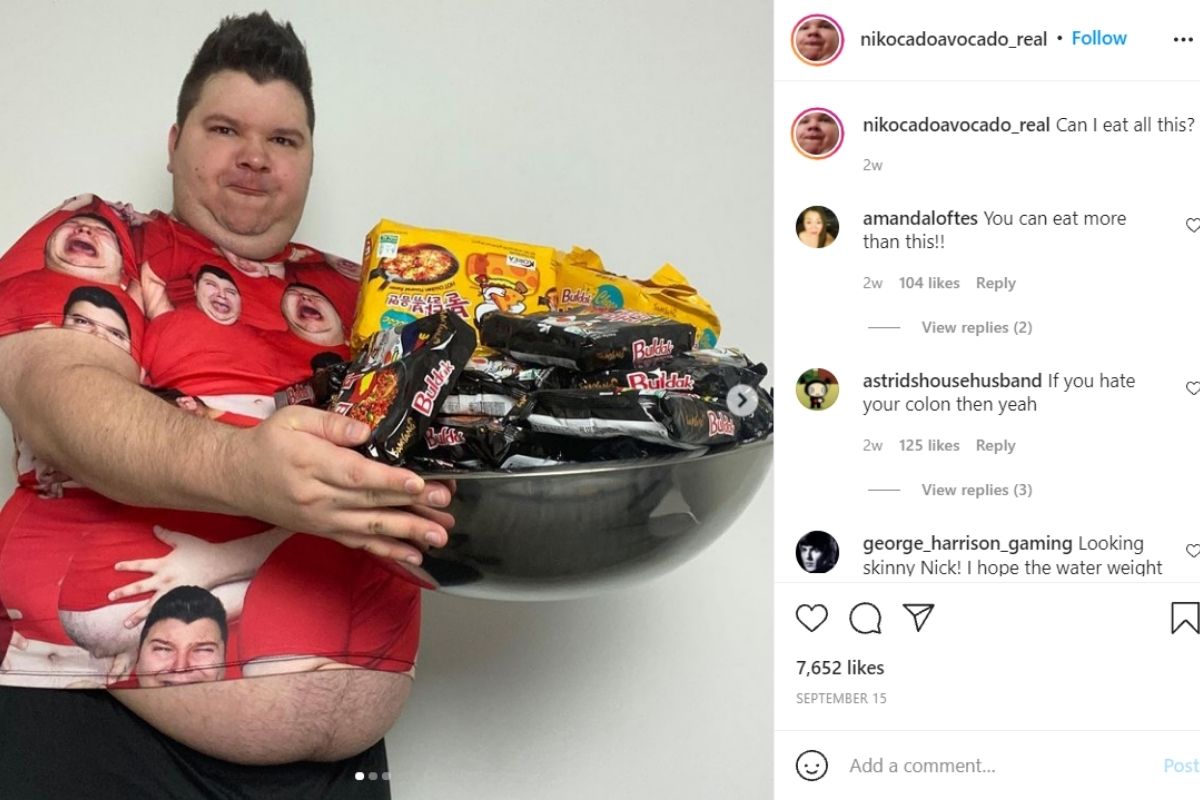 Nick Avocado Before and After

When Nick Avocado first came to public attention as a musician, we all saw a vegan who looked very slender and healthy. Nick was quite good-looking like other boys of his age.

In a 2017 YouTube video entitled, “Trisha Paytas Music Video Violin Cover Warrior,” where the former vegan was spotted displaying his prowess at playing the violin, he only had half the body mass we see today.

However, the internet star decided to change his lifestyle, not only from vegan to meat eater, but Nick took to consuming all kinds of junk food to entertain fans on his several YouTube channels. In fact, his food preferences now run to meat, including several other animal-based proteins, which is supposed to be completely off for a vegetarian.

He even kept some videos showing when he newly launched his food challenge venture; truth be told, people find it difficult to believe they are looking at the same man. Nick Avocado did not just grow fat; the former trim vegan now comes complete with fat cheeks and a double chin.

His Life as a Professional Food eater

Upon completing his studies, Nick Avocado began playing the violin as a musician, and with time, he developed into a full-time YouTuber with multiple channels. His main channel came live on the 27th of May 2014, but he waited for a couple of years before sharing his debut video in 2016.

Nick was initially known as a man who shared vegan food plus lifestyle-related content on his channel. He was later diagnosed with multiple health conditions such as hypoglycemia, vitamin B12 deficiency, and a rotting tooth, following which he decided to stop the vegan lifestyle vlog.

Soon, Nick Avocado’s YouTube channels were besieged with mukbang videos, where The Catholic University of America alum will be seen feasting on fast foods that are considered to be extremely unhealthy, and he can gulp down a lot in just one sitting. Also, he regularly featured other YouTube celebs in his posts. He became the first American to participate in what was described as the extreme-eating trend.

Today, he can boast of four self-titled channels on YouTube. His main channel on the video sharing platform has earned subscribers over 3.15 million, and the views have exceeded 664 million.

How Did Nick Avocado Get Fat?

The question about how Nick Avocado got so fat has a simple answer, and it does not go beyond excessive consumption of junk food. He was okay while practicing healthy eating as a vegan, but he began expanding when he changed to a food consumption challenge expert in 2016.

Does Nick Avocado Have a Disability?

When he was very young, Nick Avocado battled mental health conditions. At the age of five, the YouTuber was diagnosed with depression. He developed ADHD (Attention Deficit Hyperactivity Disorder) and OCD (Obsessive-Compulsive Disorder) at seven. As if that was not enough, Nick also had to contend with hypoglycemia, vitamin B12 deficiency, plus a rotting tooth as an adult.

Nick did not die. The rumors about his death started making the rounds after he reduced his social media postings which later came in a trickle, and there was a time he didn’t post anything for eight long days. His lack of activities led many to suspect he might have died.

On the possibility of him starting a weight loss program, internet searches have not revealed such. In fact, the YouTuber has told fans that he is never gonna shed weight.

Fans Have Raised Much Concern about Nick Avocado’s Weight Gain

Nick Avocado’s excessive weight gain has become an ongoing concern for some fans, while many see it in a hilarious light. Those who are concerned about the YouTuber have voiced several warnings about the possibility of his weight gain affecting his health negatively.
The troubled fans have taken to social media platforms to try and dissuade the YouTuber from his binge eating.

A Twitter user expressed shock at discovering #NikocadoAvocado, who, according to the person, went from skinny vegan activist to consuming daily mukbangs. Now, he is bed-bound with 370lbs body weight on a sleep apnea machine. The user said Nick gained so much bulk so quickly that he has broken his ribs!

Another tweet said the evolution of Nick Avocado is terrifying. With genuine concern, a third user described Avocado’s physical appearance as that of someone that is on time.

His Response to Fans’ Concern

From what is perceivable, Nick Avocado has never heeded fans’ advice to slow down on the consumption of junk food to trim down a bit. The YouTuber made light of the warnings from the public about his weight which he dismissed as water weight. There was even a time when Nick said he was scared of shedding weight.

The American social media star also shared an image of a younger and thinner Nick, asking if they thought he was attractive.