10 Things That Encourage Foreigners To Stay Away From South Africa From time immemorial, South Africa has always been a favourite tourist destination for people from all over the world and from all walks of life. It is a land filled with beautiful people, beautiful things, wonderful places and an inspiring atmosphere. In South Africa, one never lacks where to go, interesting things to do, beautiful people to meet and nature to bond with. The mixture of people who make up South Africa is one of the things that has attracted people to it. It is a rainbow country where you don’t have to be different. In South Africa, differences are put aside and life is enjoyed and lived to its fullest.

However, the diversity of South Africa has not been well appreciated by its beautiful citizens who seem to think that the presence of foreigners is a crime rather than the blessing it actually is. It is safe to say that the Xenophobic mindset crept up on some locals after it was not properly tackled from the beginning. But what’s worst is that with the most recent bouts of violence, strangers are beginning to question if coming to South Africa is worth it.

According to Zimbabwe’s president Robert Mugabe, South Africa used to be “heaven on earth”. Photos have come up from some of the attacks that will definitely discourage any foreigner from ever visiting South Africa or at least, from visiting South Africa without proper protection details. These photos are not necessarily from how foreigners are treated, but also from the living conditions that might send scary chills down the spine of strangers. As it stands now, crime has become a very serious issue in South Africa with a rise in cases of theft, rape, assault, burglary, and murders. Many have left, many are still leaving and most are not encouraged to come.

These photos and the things they connote are some of the reasons why foreigners will never want to visit South Africa again.

Cases of rape keep hiking rather than reducing, many will never forget the story of the British woman who was kidnapped while visiting the beautiful Drakensberg Mountains. She was blindfolded and bound with a rope and was later raped at gunpoint in an ordeal that lasted fourteen hours. The story set the international media abuzz for quite some time. Now after that, what right-thinking female foreigner would want to visit Drakensburg Mountains again? While you see traffic signs in other countries, in places like South Africa, what you will see is a hijack signpost and you should respect it because if you don’t, you might find yourself in a situation that is beyond your comprehension. The rules are really quite simple:

– Be careful at traffic lights as you could get car-jacked.

– Never stop too close to another car at a traffic light or for whatever reason so that you don’t get boxed in by carjackers.

– If you must drive at night, have your windows rolled up and your doors well locked.

– Yes, it is Godly to help strangers, but do not for any reason pick up hitchhikers or offer assistance to broken down vehicles. God will understand.

– Finally, whenever you see the sign below, it means: increase pressure on the accelerator. 3. Is Defense Mechanism This Serious?

Do you own a home in South Africa? Well, this is the best way to keep it secure and your household safe. If you take a drive around suburban posh neighbourhoods of Johannesburg, you will observe the extreme lengths to which panicked folks have gone to protect their property and personal safety especially now when robberies, home-invasion assaults, rapes, and murders have become depressingly common occurrences. If you don’t follow the protection detail above you can expect what happened to old Wimpie Oosterhuis and his wife Sunette to happen to you too. See how battered he looks, they were attacked on their farm near Delmas in Leandra on February 4, 2015.

The attacks on foreigners did not just start, its been going on for quite some time now. In the words of Democratic Alliance MP Dianne Kohler Barnard following the release of the 2013/2014 crime statistics, “The murder rate in South Africa is reflective of a war zone”. See Also: 10 Ideal Ways To Survive In South Africa Without The Government’s Help

How is it that South Africans don’t see that it is not foreigners who will destroy South Africa, but the locals themselves. Still in doubt? With an ideology that lists communism, Marxism-Leninism and Black Supremacy as some of their views, accompanied by hate speech and violent rallies, it’s safe to say that Julius Malema and his weird EFF party could probably destroy South Africa. They sure can do bad all by themselves. Every few years, the South Africa property market experiences a steady rise and is booming, but suddenly, without any warning, the property values will begin to drop and panic will break loose among Europeans causing them to pack-up, sell and return to Europe. There are a number of factors at play, such as media, violence, and propaganda from time to time that is very well calculated and precisely executed by fearless economist to create the fear thing, after all, who wants to be roasted. Xenophobic violence perpetrated against foreign nationals living in South Africa does not say ‘welcome’ in any way and the problem has its roots in the violent history of South African society. These foreigners already have their own issues, so why multiply it? 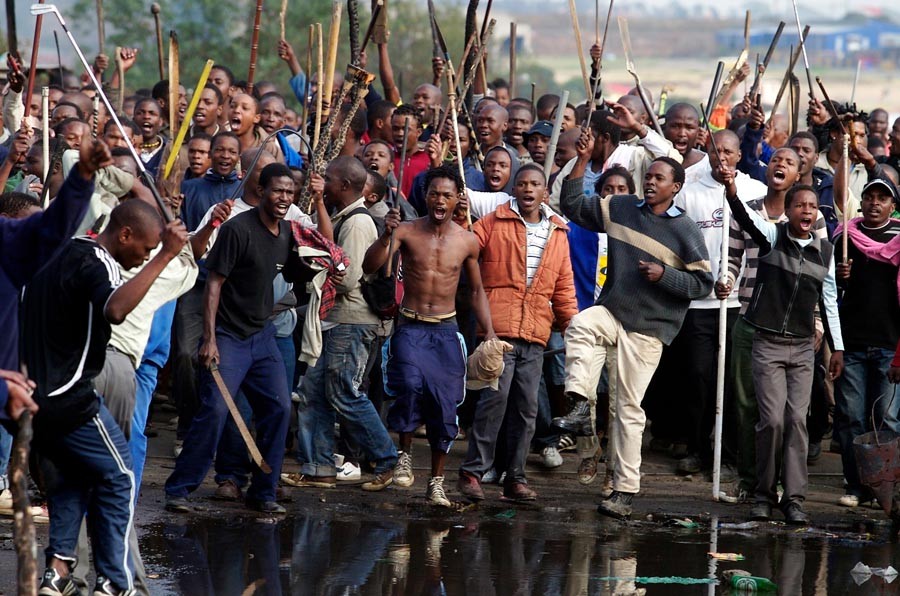 During the latest bouts of Xenophobic violence, this photo of the killing of a Malawian man went viral. If it does not make every foreigner stay away, it certainly made sure Malawians in South Africa got fed up. It is just part of the crime wave we are experiencing. It must be one hell of a crime wave when two black youths break into a house, torture an elderly widow to death, then return to the house every day for a week to eat and drink and enjoy themselves and then pile the scrap food and the Bible on top of the dead and decomposing body before setting the house ablaze.