10 Most Visited Websites In South Africa International websites may have gotten the best of Africa in the recent past; but nowadays, it seems most Africans are making a switch. They are developing a penchant for their local websites. And a good example of such a country is South Africa – the pacesetter. According to Alexa’s Traffic ranking report, South Africans are now visiting their local websites more often than they actually visit their international counterparts, like Google or Facebook. With that in mind, what are the 10 most visited Web sites in South Africa according to Alexa’s ranking report? Here it goes…

10 Most Popular Websites in South Africa 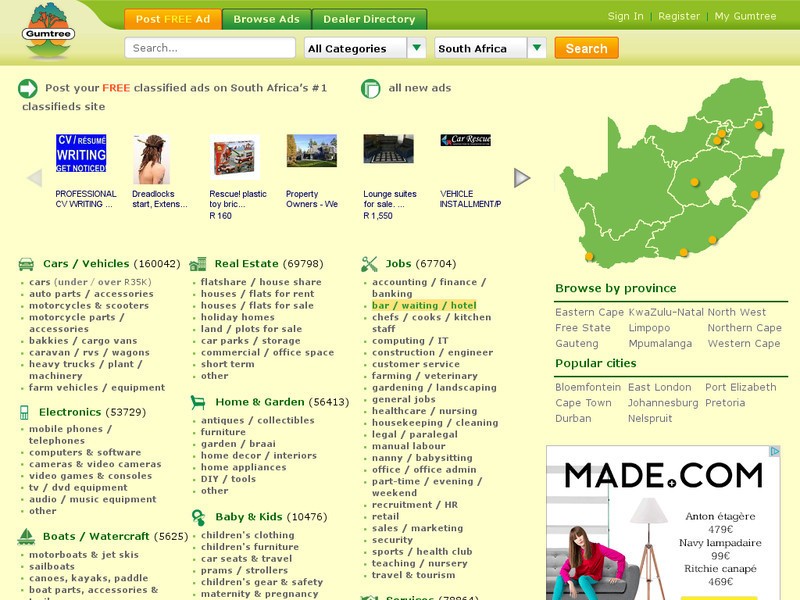 Gumtree website has been ranked at position 7 in South Africa and position 1,245 globally. According to the report, 92% of those who visit the site are actually from South Africa, while 1.3% are from the US; 1.3% from India; 0.7% from the UK, with the rest coming from the other parts of the world. News24.com is among the most visited online news resources in South Africa and the rest of Africa as well. Actually, the site has, for long, been providing a 24 hours news coverage for both local and international happenings, which makes it a reliable news resource in Africa. With its headquarters in Cape Town, the site has managed to secure a global ranking of 1246 and is locally placed at 8th position.

Bidorbuy.co.za is an online market site that connects South African sellers and buyers for trade. In the site, you can trade in almost anything by either selling the product directly to a buyer or by auctioning it. Even though the site has been in existence since August 1999, it started to gain popularity in 2012 to become one of the most popular websites in South Africa and Africa at large. And presently, as we speak, bidorbuy.co.za is internationally ranked at position 1779 and locally placed at 9th position.

Fnb.co.za is a commercial banking website that provides banking services to over 7.2 million customers from South Africa alone, who account for approximately 98% of all the site’s visitors. In addition, the site is visited by a large number of people who range from college students to mature adults, with a strike of balance in both genders. According to the report, the website has been globally ranked at position 1,875 and locally ranked at 10th position.

Absa.co.za is a site that’s owned by one of the largest private and commercial bank in South Africa, ABSA. This bank offers a wide range of banking services, like internet banking, which accounts for the bulk of the site’s visits. According to Alexa, the site is globally ranked at position 3, 489 and locally placed at 20th position. On similar grounds, 96% of all those who visit the site come from South Africa, while 1.4% are actually from Mozambique and 0.5% from Pakistan.

Junkmail.co.za is a South African website that is generally used for advertising or selling products. In other words, it’s the biggest online classified in South Africa that at the moment, holds a local rank of 21 in South Africa, and a rank of 3, 943 globally. If broken down, 95% of those who visit the site are actually from South Africa, while 1.4% and 0.6% are from India and the US respectively.

iol.co.za is a website that propagates a wide range of world news from South Africa; ranging from sports news, business news, classifieds and motoring news as well. From the report, the website is globally placed at position 3, 150 and position 23 in South Africa. Similarly, the site recorded a total of 2, 201, 348 unique browsers in 2013; and, on average, the site accumulates a total of 21, 314, 697 views every month.

Mybroadband.co.za is a South African based website that relays information concerning all types of internet connection in South Africa. On average, the website actually accumulates 6, 277, 874 page views every month, with a total of 767, 885 unique browsers. From the Alexa report, the site holds a global rank of 4, 096 and a local rank of 25 in South Africa. Furthermore, 80% of those who visit the site are actually from South Africa; and the remaining 3.6% from the US and 3.2% from India.