A Brief History Of Venda People

However, the Mapungubwe kingdom saw a decrease in the power it wielded around 1240 as power moved from their hands to Great Zimbabwe. The first settlement in Venda belonged to the legendary chief Thoho-ya-Ndou (Head of the Elephant) and was located in Soutpansberg. The remains of his royal kraal, which was called D’zata is now a National monument. The Venda people also share ancestry with the Kalanga people and the Lobedu people while also being related to the Sotho-Tswana and the Shona groups. Mapungubwe Museum located in Pretoria serves as home to collections of artifacts found in archeological sites.

Venda People Are Of Heterogeneous Groupings and Clans Today, the ethnic groups known as the Venda people include the Vhangonas, the Masingos, the Takalanis, and some others. The Masingos are originally from central and eastern Africa but migrated across the Limpopo river during the time of Bantu expansion. The Vhangonas were the original habitats of Venda, and are referred to as Vhongwani Wapo.

The present Venda people today are divided into heterogeneous groupings and clams which include:

There Are Varying Versions Of Vhangona History We have already established that the Vhangonas were the original inhabitants of Venda. However, there are different accounts about the history of the Vhangonas. According to one of the stories, Mapungubwe was the capital of Vhangona and Raphulu Royal was the most senior house in Vhangona. This story holds that Venda had a king called Thovhele and had approximately 145 chiefdoms and the kingdom was divided into 7 districts:

Each district had a chief who paid tribute to the paramount chief Mahosi Mahulu.

The other version of Vhangona history claims that the Vhangona was never united under one king and that they had different chiefdoms. Both accounts have been told for centuries – it only depends on who you ask. The Mapungubwe kingdom which was known as the center of the Venda land was also known as the center of trade. The people were known to mine and melt gold, iron, and copper. They also made glass, ceramics, and spun cotton. They also planted sorghum and millet and were into animal husbandry (rearing animals like goats and cows). They carried out trade with neighboring countries like ancient Ethiopia through the port of Adulis on the Red sea.

People of Mapungubwe were also known to have known about the star and astronomy and they made use of this knowledge for their day-to-day lives and they also played a role in their tradition. There are beliefs that the people of Mapungubwe migrated to Zimbabwe because they believe Great Zimbabwe had more stable weather.

Today, it is rare to attend a core Venda marriage ceremony because civilization has replaced a lot of traditional activities with some contemporary practices – even brides and grooms no longer wear core traditional Venda attires. During Venda marriage ceremonies, there are usually a lot of traditional meals and music, as well as dance. After the ceremony, the makoti would live with her mother-in-law for some time and during this time, she learns how to take care of a home and how to take care of her husband.

Just like the Pedi people who don’t see anything wrong with marrying your cousin, Venda people also prefer cousin marriage, however, it is not a compulsory practice. Venda people also allow polygamy and like some parts of Africa, a girl can be betrothed to a man and not eventually get married to him (that is, she can break off the betrothal). The reasons for this could be anything, including not having a connection with the man in question as she grows older.

Although polygamy is allowed among the Venda tribe, it is more common among wealthy people who can afford to keep more than one wife. Older men also get married to younger women who will bear them children at their old age and also take care of them.

The Venda language is called Tshivenda or Luvenda and it is one of the 11 official languages in South Africa. The vocabulary is similar to that of the Sesotho and there are also similar elements between the Venda language and the Shona dialect. Up to 650,000 people around Limpopo speak Tshivenda.

In Venda, different genders have different roles – men, women, boys, and girls have different roles in the family and within the community. The women are responsible for keeping the house clean and ensuring that the family gets a good meal. While the men are responsible for providing for the needs of the family, they also take care of the animals – goats, sheep, cattle, etc. On the children’s part, the boys help their father out in the field, while the girls assist their mother at home. 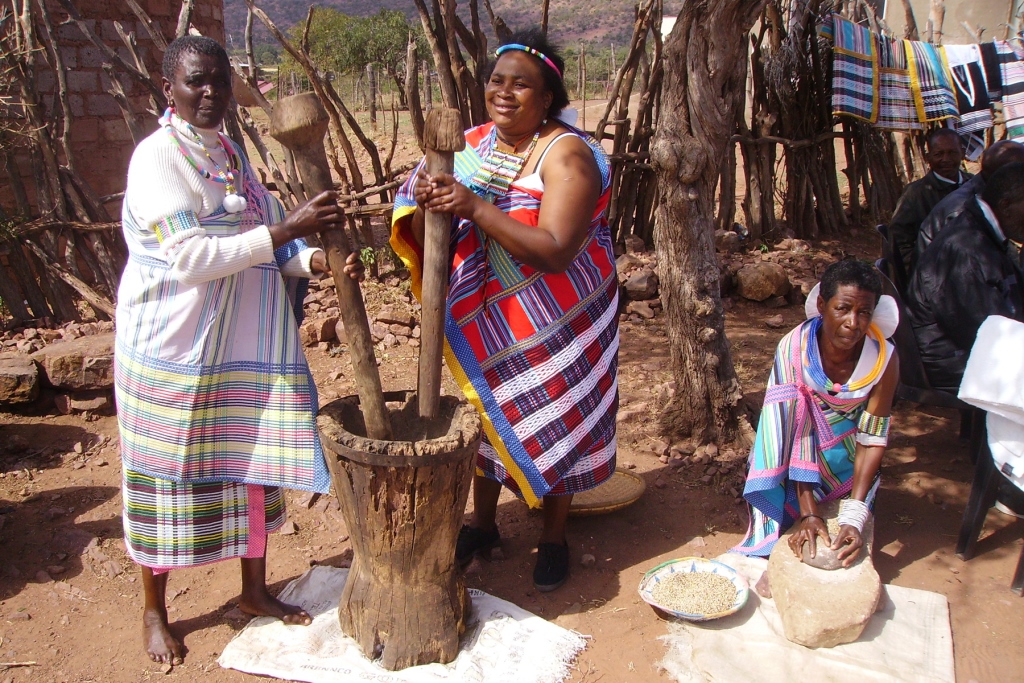 It is noteworthy to add that in modern times, most men no longer rear cattle nor do the women stat at home to cater to the homefront. Today, both men and women now seek secular jobs (or engage in one form of business or the other) in order to contribute to the financial running of the home. However, women still ensure that the family eats good food and that the home is clean, and sometimes, men help them out.

The core Venda traditional clothing has nothing to do with fabrics at all as it is made of animal skin; the skin is obtained from animals caught during hunting. However, such clothes are now believed to be sacred because they represent the ancestors. In modern times, there are Venda fabrics that are tied around the waist and chest as traditional attire. And both men and women make use of these fabrics to sew modern attires. Some modern designs for the traditional Venda attires include:

A post shared by Swati and venda weddings (@swati_and_venda_weddings)

A post shared by Swati and venda weddings (@swati_and_venda_weddings)

Before the advent of Christianity in Africa, the prevalent mode of worship in Africa was the African traditional religion. In Venda African traditional religion, water is a very important element. The Venda people believe there are water spirits (which are called Zwidutwane) that inhabit the bottom of waterfalls. In accordance with their beliefs, they give offerings to these spirits in worship. Also, the people of Venda do not hunt crocodiles because it is generally believed that crocodiles have poisonous brains.

The Venda people have a number of dancing styles but the most famous of them all is called the Python dance. The Python dance is held every year at Lake Fundudzi, a place that is believed to be sacred for drawing rain during the planting season. The attire for this dance is usually an apron that is worn around the waist. Different genders also perform different types of dance. Married women and single ladies perform Tshigombela and Tshifhasi dance respectively. These dance routines are done during the farming season when the first green maize cob appears on their farms. Men also have their own type of dance called Tshikona. This dance routine is displayed during religious ceremonies, like funerals or weddings. During the performance, each male dancer holds a bamboo pipe that is used to create the melody.

Around the 1970s, Venda used to be one of the poorest tribes in South Africa, and in a bid to encourage them to accept independence as Bantustans (pseudo independent territories), the government built offices, parliament, and houses for parliament ministers. Education was also subsidized for the people in the form of free books, and zero tuition fees.

This encouraged the Venda people to open up to education and all the civilization that comes with that. Despite their best efforts, the government fell short of providing good schools for the Venda people. However, they embraced what was available as the people now had access to formal education.

What We Know About Musangwe: Venda Bare Knuckle Fist Fighting

Musangwe is a bare-knuckle fist fighting sport among the Venda people that serves as entertainment and also for gaining respect or establishing boundaries between peers. In ancient times, since fighting was not allowed in the community, if you felt offended or disrespected by anyone, you could challenge them to a bare-knuckle fistfight (Musangwe).

If you are challenged for a fight, and you refuse to accept the challenge or turn it down, there are consequences that accompany such an action. These consequences may include being flogged by able-bodied men in the community or a fine. However, the fight is also regulated by elders who ensure that dangerous attacks like biting, kicking, etc are not allowed. Also, no one is allowed to gamble on who the winner of the fight will be. The fight has no time frame; the two parties fight until one person gives up.

Tshidzimba is one of the renowned foods Venda people eat. This meal is made from groundnut and provides a lot of protein.

This major ingredient in this meal is termites and the food is very proteinous. You can get bitten while you are catching the termites, but after preparing them, you will realize that the stress is worth it.