Who is Hendrix Wilburn? Everything About Future’s Kids

Being the son of one of the most celebrated American hip-hop artists and highest-paid rappers, it is just typical for individuals to be eager to know more about the life of Hendrix Wilburn.

Hendrix Wilburn Was Born in 2018

Hendrix was born to his parents, Nayvadius DeMun Wilburn and Joie Chavis, on 15th December 2018 in the United States of America. He is of African-American ethnicity and is an American national with his zodiac sign being Sagittarius.

Speaking of his education, there is no information to expound on as Hendrix is still pretty young and probably still being home-schooled. As for his career path, Hendrix is still a minor and is not yet on any professional pursuit.

Hendrix Wilburn’s father whose full name is Nayvadius DeMun Wilburn, but popularly known as Future, is one of the most celebrated American rappers, he is also a singer, songwriter, and record producer who began his career in 2010 by producing a series of mixtapes such as True Story, Dirty Sprite and 1000.

The Atlanta-based rapper born on 20th November 1983 is a well-known name in the music industry. He equally ranks well on the list of the highest-paid rappers. Future got into the music industry with the help of his cousin, Rico Wade, under the Dungeon family. Hendrix Wilburn’s mother, Joie Chavis, is a YouTuber, fitness trainer, dancer, model, and entrepreneur. She became more popular after news of her relationship with Future made it’s way to the tabloids. She was also once a backup dancer for various popular artists such as Janelle Monae, Tank, Eric Bellinger, and also Future himself.

As a social media personality, she is currently doing well and has a YouTube channel named Joie In Life with over 8.2k followers. The contents on her YouTube channel are mainly posts related to workouts, diet, and fitness equipment. She is also available on Instagram under the username @joiechavis with over 2.2 million followers. She regularly posts photos of herself, her kids, and the various brands she endorses.

Being a fitness bunny, she runs a health and fitness brand that is focused on helping people maintain a healthy lifestyle. She also owns a shopping and retail online store where she provides products related to health and fitness such as fitness equipment, swimwear, and athletic apparel. She is said to also own a clothing line which she had named after her daughter Shai Moss.

While Hendrix Wilburn’s parents, Future and Joie Chavis, were dating, they were very open about their relationship and it was anything but confidential, especially when they made the headlines with their exotic vacations. 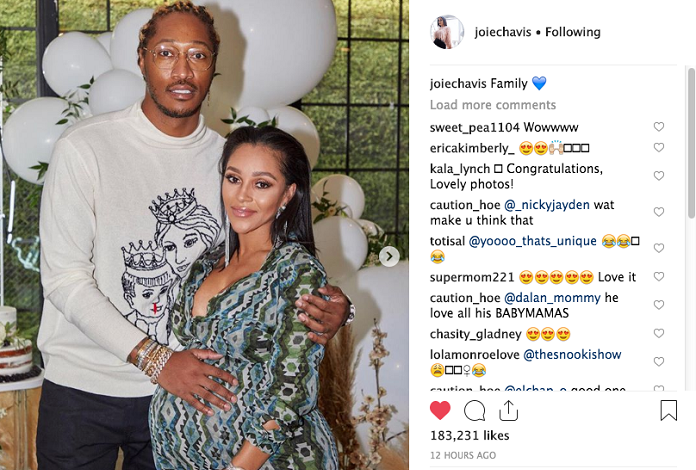 In 2018, Joie with excitement took to her social media account to announce that she was expecting a baby although she did not reveal the name of the child’s father. Her baby shower party was lavish and she was gifted a 5-carat diamond watch from her baby daddy, Future, on that day.

Unfortunately, the love story of Hendrix’s parents came to an end as the couple parted ways. The reason for their breakup was not made public but many had suspected that the rapper must have moved on to another woman as he has a history of dating different women. The breakup notwithstanding, the pair have done a good job of maintaining a cordial relationship for the sake of their son.

Hendrix Wilburn Has Eight Half-Siblings From Both Parents Jakobi Wilburn is the eldest child of the famous rapper, Future. He was born June 30th, 2002 in Los Angeles, United States of America, to Future and his ex-girlfriend Jessica Smith, who is an actress. The celebrity kid followed in his father’s footsteps and is also a rapper. He has released various songs such as Bad Reception, Pink Lemonade, and Bricc

Prince was born on December 5, 2012, to Future and his ex-girlfriend Brittni Mealy, who is a social media influencer and entrepreneur.

Future Zahir (Future Jr.) was born on May 19, 2014, to Future and singer Ciara. As at the time of his conception, his parents were engaged to be married but their engagement was later called off for reasons best known to them.

There is no information on the birth of Kash Wilburn or who the child’s mother is. This information has been kept private and away from the public and media.

Paris is also one of the children born to famous rapper, Future and his ex-girlfriend Jenelle. Detail about his exact date of birth has been kept away from the media.

Reign Wilburn is the child Future and his ex-girlfriend, Eliza Reign, had while they were together.

Londyn Wilburn is the oldest daughter of famous rapper Future born to him by his ex-girlfriend India J. Londyn was born on March 19 2009 and that is all the information available about her.

Shai Moss is Hendrix Wilburn’s half-sister born to his mother and her ex-boyfriend, famous rapper Bow Wow, on April 27, 2011. Shai is an emerging actress, fashion model, and social media personality. She also shares a close bond with her half-brother Hendrix.

Hendrix does not have any net worth as the celebrity kid is not up to the age to take up a career and earn a living. However, his father’s net worth is estimated to b $40 million, which is gotten from his career as a musician and endorsement deals.

His mother, Joie Chavis, has a net worth estimated to be approximately $1.2 million, which she must have made from her career as a model, social media personality, brand endorsements, and also from her business.

This goes to show that Hendrix Wilburn is living a life of luxury and is sure enjoying his childhood.