By Chacha O
Family and RelationshipsPeople

Carl Nassib’s boyfriend is Erik Gudzinas, a staff of an NGO who is popularly known as the gay partner of Carl Nassib, the openly gay NFL defensive end.

Erik, who is an Eastern Pennsylvanian native, has received a lot of love from the gay community since the official announcement of their relationship. He is a biology graduate from West Chester University in Pennsylvania and works with a Non-Governmental organization.

How Old Is Eric Gudzinas?

According to recent reports, Erik Gudzinas is said to be in his mid-twenties, but details regarding his date of birth have never been discussed in public space. In the same vein, the young man has never deemed it necessary to reveal the identities of his parents. It is not equally known whether Erik was raised as a lone child or grew up with siblings.

Reports have described Gudzinas as a man who hails from Eastern Pennsylvania in the United States of America; with that said, it is glaring that he is a citizen of America, but his ethnicity has never earned a mention. Though many believe him to come from mixed roots.

Erik Gudzinas has been described by many as a well-read man. The Eastern Pennsylvanian native commenced his academic journey in his locality before moving on to the Lehigh Valley to attend high school. He participated in sports during his days as a high school student, where he swam for his school.

There are some notable American personalities who attended the same high school as Erik, and a good example is Lisa Ann – a known NFL analyst who used to work in the adult movie field. Proceeding for higher academic qualifications, Gudzinas chose to pitch his tent with West Chester University located in Pennsylvania, and in December 2015, he graduated with a degree in biology.

What Does Erik Gudzinas do for a Living?

Armed with a degree in biology, Erik Gudzinas landed in the labor market in search of a means of livelihood. He secured paid employment in the Greater Philadelphia area with a non-profit organization.

Though the name of Erick’s NGO has never been mentioned to the hearing of the media and the general public, it is said to focus on assisting adults with behavioral and intellectual issues. Reports did not state exactly when Eric started working With the Non-profit organization, but he has served with them for several years.

How Long Has Eric Gudzinas Been Carl Nassib’s Boyfriend?

How long Eric Gudzinas and his same-sex partner, Carl Nassib, lasted as closeted lovers weren’t revealed. Still, according to reports, it was around 2021 that speculations about the NFL defensive end for the Las Vegas Raiders dating Erik rent the air.

Before the news of their relationship, Erik’s boyfriend, Carl Nassib, had already made the records as the first active National Football League player to declare his gay sexuality to the public. Carl achieved this feat when he took to the picture-sharing platform to do an Instagram live post, declaring himself a homosexual.

Talking in an interview session on the Comeback Stories podcast by Darren Waller, the defensive end for the Las Vegas Raiders bared his soul about his personal needs. According to Carl, what he wanted from life was to be someone’s priority, adding that he has what he has always yearned for, so it was all good and fine.

Speaking further on the podcast, Carl admitted he has someone in his life without naming any names. However, fans who have been highly expectant since he came out as gay wasted no time digging up the missing link in the puzzle. Within a short while, speculations started making the rounds that Carl’s beau was Erik Gudzinas, as Erik has been posting Insta stories featuring Carl for a while.

The first time that Erik shared an IG photo of him and Carl was in September 2021; this happened to be when the Raiders came against the Steelers. Before long, Carl reciprocated by sharing the same image on his official IG handle, accompanied by a smiley face emoji. Needless to say, this made their relationship Instagram official. 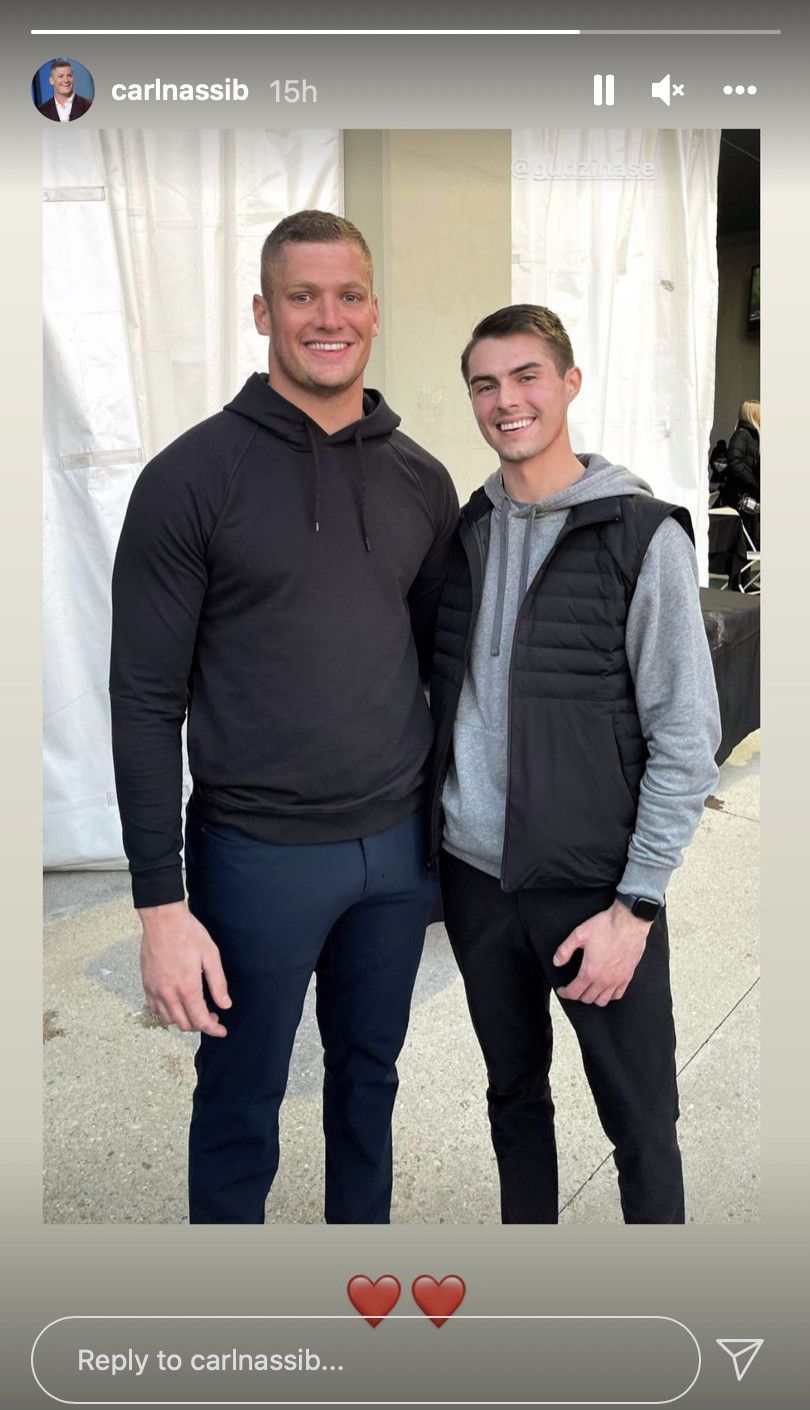 Since they officially became a couple, the duo has been unabashed about conducting their relationship in the public eye. They have been reaping praises and adorations from fans, especially the LGBTQ+ community. Carl, who is very proud of his choice of a lover, had revealed that Erik wasn’t out to anybody when they met.

Nassib’s coming out has inspired many gay people still in the closet. This is especially true when you consider that it took Carl 15 long years before he gathered the courage to come out. The NFL player accompanied his public announcement with a charitable course; the NGO known as the Trevor Project received $100,000 from him. Trevor Project is focused on assisting LGBTQ+ kids in abstaining from committing suicide.

The Gay Couple Seem to be Inseparable

Since the official announcement of their relationship, Erik Gudzinas and Carl Nassib appear inseparable. The duo is seen everywhere together. They were together when Carl went to Pittsburgh with his team to encounter the Steelers in Week 2.

They spent their first thanksgiving celebrations as a couple together, even though Carl had to spend a greater part of the holiday at the AT&T Stadium, where his team played with the Dallas Cowboys. Even at that, Erik was sighted in the crowd of spectators, rooting for his partner. From what is perceivable, the NFL same-sex couple appears to be a perfect match. When asked why he made his relationship with Erik official, carl said he was obligated to help bring representation to the LGBTQ + community. The romantic duo already have a fan account opened by their admirers on Twitter. Carl has since met with Erik’s family last Halloween, and the relationship looks set to go far.