What is Megan Thee Stallion’s Height and How Much Is Her Weight?

The Houston hottie, as she calls herself, became famous in the middle of 2019, after the release of her debut EP, ‘Tina Snow.’ With her heart-stopping, confident, and sassy lyrics, the Texas-born rapper embodies her stage name to the tee. For Megan, it has been her body type and height that have given her a place in conversations.

How Tall is Megan Thee Stallion?

In a 2018 CDC height report, it was revealed that American women who were 20 years old and above stand at an average height of 5 feet 4 inches. Again, we see that Megan stands taller than her female American counterparts. Standing at 5 feet 10 inches, she is part of the 1% who make up the tallest part of the population.

The Houston rapper stands tall among women, whether famous or not, and she has constantly rapped about how proud of her height she is. However, her confidence in her appearance and height wasn’t inborn, as she was bullied in high school because of her height. With all the statistics provided so far, do you wonder how tall Megan Thee Stallion might be among fellow female rappers? Let’s find out in a few seconds. The Trinidadian rapper Nicki Minaj, known fondly as the queen of rap, has been one of America’s most successful female rappers in the past decade. Although she has enjoyed massive fame and fortune, Nicki stands only 5 feet 2 inches tall. This pegs Megan’s height at nearly 8 inches taller. The ‘Bodak Yellow’ hitmaker stands at a pretty decent height of 5 feet 6 inches. This puts Megan Thee Stallion nearly four inches ahead of her ‘WAP’ collaborator. By now, you may probably be getting used to the fact that it’s pretty hard to outdo Megan’s height.

How Tall is Megan Thee Stallion Compared to Doja Cat’s? With her ethereal music, Doja Cat has led the world into ‘Planet Her,’ her latest album, and has reigned supreme on both the hit songs charts and the streaming platforms. However, all her mighty accomplishments still do not change the fact that at 5 feet 3 inches, she is not only below the average for American women but is also towered over by Megan Thee Stallion’s proud 5 feet 10 inches frame. 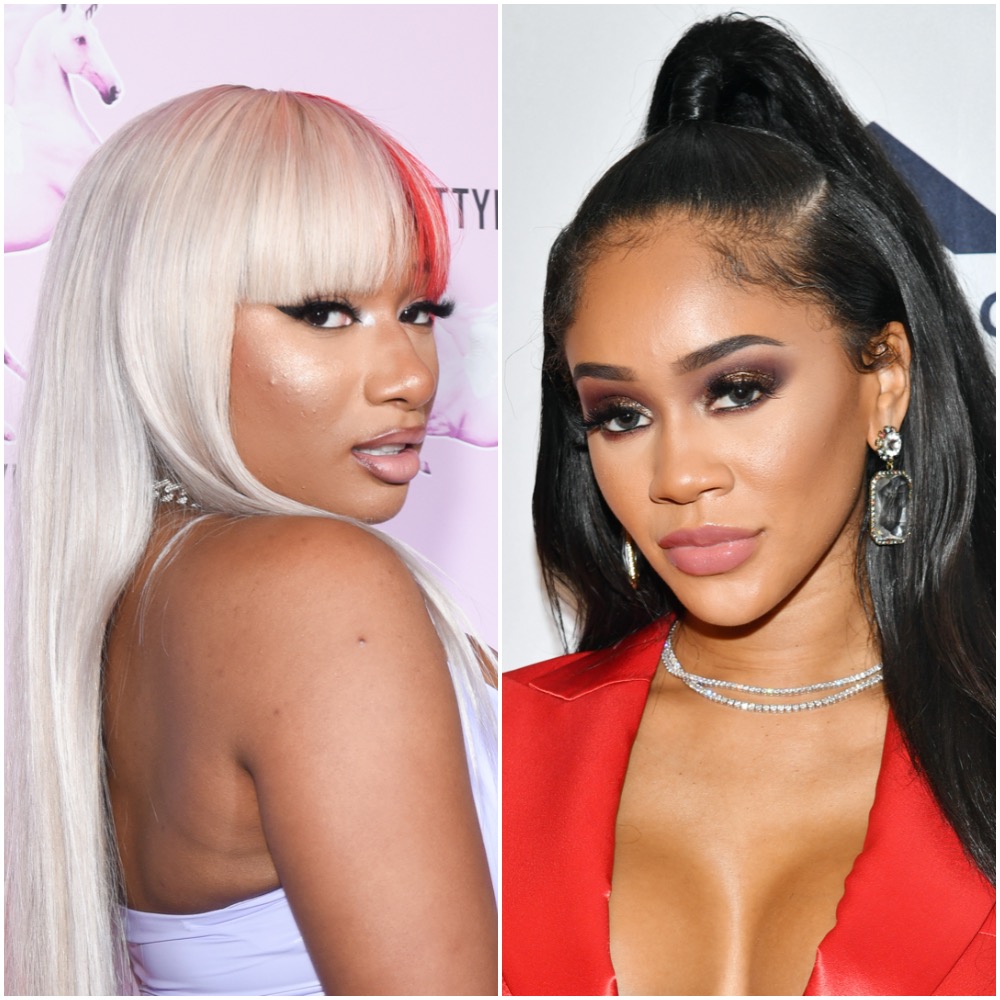 ‘Icy Girl’ star, Saweetie has been outstanding among the new wave of female rappers that have swept across the country in the last four to five years. Standing at a pretty decent 5 feet 8 inches, we can see that although she is shorter than Hit-Girl Meg by two inches, she isn’t exactly dwarfed by the ‘Body’ rapper.

What Is Megan Thee Stallion’s Weight?

As previously stated, in January 2021, Megan Thee Stallion began a new training program called the ‘Hottie Bootcamp.’ The ‘Thot Shit’ rapper curated a no-holds-barred reality weight-loss YouTube show, sharing her complete journey to a trimmer, curvier, and stronger body. By the end of the training, she had lost over 10 pounds and currently weighs about 143 pounds.

The rapper further elaborated on the purpose of the series, saying that the idea was not just to lose weight but also to cultivate the culture of healthy eating. To achieve her aim, Megan underwent rigorous HIIT (high-intensity interval training) workouts specially designed by her personal trainer. The routines she underwent consisted of;

In addition to the stringent routine she put herself through, Megan Thee Stallion also made serious changes in her diet. She began the training by throwing away all the junk food in her fridge and started drinking lots of water, with her goal being to drink as much as a gallon of water per day.

A Look at Other Megan Thee Stallion’s Body Measurements

Appearances are very important in the music industry, and we can’t deny that plenty of our favorite celebrities have remained relevant partly because of their looks. Megan Thee Stallion is undoubtedly no exception. Apart from her height which makes her stand out in any crowd, Megan has other weapons in her arsenal of physical accomplishments.

Chief among all her attractive physical features is her perfect hourglass figure. With body measurements of 38-26-38, the rapper is undoubtedly one of the most endowed, as evidenced by how sexualized she is.

Confidence in her body did not come easy for the Houston rapper, as she has struggled with weight gain and feelings of inadequacy for the most part. However, in stark contrast to her onstage persona, the rapper appears to have a very softcore and doesn’t hesitate to open up to her fans about how she feels about her body. She even gave details of her journey towards fitness in her 2021 training regimen called the Hottie Bootcamp.

It Has Been Rumored That Megan Has Undergone Possible Body Enhancements

Because of how common it is for female artists to go under the knife these days, it’s a bit of a surprise to find out that Megan Thee Stallion has not undergone any form of surgery on her body. The rapper said so herself in an interview, stating that her body was all-natural.

Judging by how hard she worked in her Boot Camp, there is no reason to think that Megan Thee Stallion wouldn’t put in the work needed to look the way she does.