Sulayman Chappelle (born 2001) is the 22 years old son of Dave Chappelle, the American veteran comedian, and his wife, Elaine Erfe Chappelle. Apart from just being the son of famous parents, Sulayman is also learning the ropes to hopefully become a professional boxer someday.

Beyond the aforementioned, there’s still a lot more about Sulayman than meets the eye. Peruse on to learn some interesting facts about Dave Chappelle’s son.

As mentioned above, Sulayman Chappelle is the firstborn child and only son born to his parents, Dave Chappelle and Elaine Erfe, in 2001 in Ohio, United States of America. His exact date of birth is not available as the celebrity kid has not disclosed anything about himself. 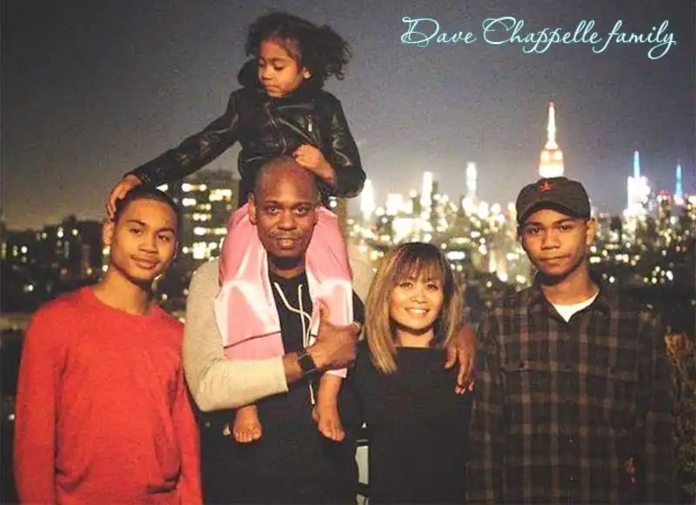 His parents have been doing a great job in keeping his personal life away from the media and public scrutiny, and in the bid to do that refused to disclose the dates of births of all their children.

His name ‘Sulayman’ is an Arabic name that means “The Man of Peace,” while the English translation is “Solomon.” The celebrity kid is of African American ethnicity and is an American by nationality with a part-Filipino ancestry through his mother’s side.

Sulayman stands at a height of 5 feet 9 inches taller than the average American man and weighs 65 kg. He is not the only child of his parents, as he has two siblings, a younger brother named Ibrahim Chappelle and a younger sister named Sanaa Chappelle. Sulayman shares a close bond with his parents and siblings, and they all live happily together in a 65-acre farmhouse very close to Yellow Spring.

Talking of his educational background, there has been no information on his education, such as the schools he attended and the certificates or degrees obtained, but it is believed that he is well educated with regard to the rich family background he comes from.

Dave Chappelle’s Son is Traning to Become a Professional Boxer

Sulayman Chappelle had shown interest in boxing and began boxing right from his high school days. In a bid to encourage the young man’s passion, his father, Dave Chappelle, had to talk to a close friend of his who happens to be one of the best boxing trainers in the field named Freddie Roach – who was Manny Pacquiao’s trainer – to mentor his son.

The younger Chappelle was mentored by Freddie Roach and began training at Pacquiao’s Boxing Gym with the dream of becoming a professional boxer someday. Today, he has become a vicious boxer and judging from the look of things, it is very likely that Sulayman will not be following in his father’s footsteps.

Either way, Chappelle is still a young man and is under the care of his parents. He is still yet to decide on the career path to take on; whatever he decides on in the nearest future, there is a high chance that the young star will become a successful personality just like his father. For now, he is enjoying his childhood and is been managed by his parents. The stand-up comedian practices Islam as his religion and is of African–American descent. Sulayman’s father began his dream of becoming a comedian when he relocated to New York, and by 1990, he had featured in the first episode of ABC’s America’s Funniest People.

Sulayman’s father made his first film debut playing the character of Ahchoo in Mel Brook’s movie titled Robin Hood: Men in Tights. He got to experience a boost in his career after he made an appearance in the Russell Simmons Def Comedy Jam on HBO. In 1996, he played the recurring role of Dave Carlisle in the TV comedy series, Buddies.

Moving ahead, he made an appearance in the Oscar-winning comedy movie, The Nutty Professor alongside famous actor Eddie Murphy. In 1998, he co-wrote the cult stoner film Half Baked and then went on to record his first long-hour HBO special movie, Dave Chappelle: Killin Them Softly, in 2000.

Dave, in 2003, debuted his own weekly sketch comedy show titled Chappelle’s Show which he diligently did for two seasons, after which he quit the show during the production of the third season. And although it was said that the reason he left the show was that it had taken another path that he was no longer comfortable with, many believe he left the show due to drug addiction problems.

In 2006, Dave Chappelle had already made a name for himself and was called the “Comic Genius of America” by Esquire and was been ranked by Rolling Stone as No 9 in their “50 Best Stand-Up Comics of All Time.” Some popular TV programs and talk-shows Dave has appeared in are The Tonight Show with Jay Leno, Late Night with Conan O’Brien, The Daily Show with Trevor Noah, and many others.

Sulayman Chappelle’s mother, Elaine Erfe, is a housewife who maintains a very low profile which makes information about her very sketchy. Elaine was born to her Filipino parents on August 31, 1974, in Brooklyn, New York.

Sulayman’s mother had always aspired to become a professional chef someday but had to put her aspirations aside and become a housewife to support her husband and take care of the kids.

Sulayman Chappelle’s parents, Dave and Elaine Chappelle, had met each other in Brooklyn, New York. Dave had moved over there to pursue a career in comedy, and when they met each other, he was still trying to find his path in the entertainment industry. The pair got acquainted and began dating for a period of time, after which they took their relationship to the next level by getting married in 2001. Their marriage, which has lasted over two decades, has not been all rosy as they have also had normal couple fights but are still together.

Dave Chappelle had received a lot of backlash for marrying outside of his race as his wife Elaine is Filipina. Despite their ups and downs, Elaine has been a constant support for Dave, helping him achieve his dreams and proving their marriage to be quite the strong one. Currently, the husband and wife are still living happily together.

The celebrity kid is not married, nor is he involved in any romantic relationship, past or present, as he is still too young to take on this part of life. The young lad is pretty much focused on his academics and training to become a professional boxer.

Also, Sulayman Chappelle does not have a net worth as he does not earn an income and is still yet to decide on a career path to take on. However, his father is said to have a whooping net worth of $50 million, which was obtained from his successful career as a stand–up comedian.