Samantha Speno is the ex-wife of the famous WWE superstar Randy Orton. Though she is best known for being Randy Orton’s ex-wife, she is also creating a name for herself in the world of business. Samantha is an entrepreneur and actress, having formerly worked as a gymnast and waitress.

For Samantha and Randy, it was an attraction at first sight, but unfortunately, happily ever after did not exist for them, as they soon realized that marriage between both of them couldn’t work. Notwithstanding, being Randy’s ex-wife brought Samantha fame and blessed her with a daughter. Plus, there is more to know about Samantha Speno than being once married to Randy Orton.

Samantha Speno was born on 11th January 1982, making her 40 years old today. She grew up in the St. Charles area in Missouri and attended Francis Howell North High School. While in high school, Samantha already had an interest in becoming a gymnast and showed interest in sports. And after matriculating in 2000, she picked a job and started pursuing her dream to become a gymnast trainer.

At the age of 18, Samantha started working as a bartender. While working, she also started pursuing her training to become a gymnast trainer. Thankfully her hard work and determination paid off, as she soon became a certified trainer.

Samantha is also someone who is not afraid of trying out other career ventures. In 2007, she was featured in Sunset Tan, a series that tells the story of employees that work in a tanning salon in Los Angeles. Although she is also referred to as an actress, this is the only known series she has been featured in.

Samantha Speno’s salary as a bartender was certainly not enough to give her all the money she would have desired to have but, that job created the platform that allowed her to meet Randy Orton, and it is safe to say that it changed her life.

One fateful day, while Samantha worked as a waitress, the WWE superstar Randy Orton and his friends came into the bar to grab some drinks, and as soon as he saw Samantha, it clicked. The attraction he felt made him talk to her that day, and she was also interested, as they both exchanged numbers.

The following day, after their first meeting, Randy asked Samantha out on a date, and she obliged. And that was how they started dating. By 2005, they got engaged, and after being engaged for about two years, wedding bells began to ring. On 21st September 2007, they exchanged marital vows. A year after their marriage, they welcomed their first child on 12th July 2008. Their daughter’s name is Alanna Marie Orton.

After 6 Years Of Marriage, They Got Divorced

When Randy and Samantha were married, she showed him support. She attended his matches and watched him wrestle in the ring. They were good together until being husband and wife stopped working for them, and Samantha filed for divorce in March 2013.

Unlike most celebrity divorce, where the spouse who is the actual celebrity loses a huge part of his fortune to the other half, Randy Orton was fortunate to still keep his 2011 Bentley, 2012 Range Rover, 2009 Harley Davidson, house, gun collection, jewelry, as well as the right to his WWE contract, which paid him $291,666 per month as at that time.

On the other hand, Samantha was left with her jewelry and $654,317 bank account. She was also given full custody of their daughter, who was four years old at the time. However, Randy Orton was allowed visiting rights. He was also ordered to pay a monthly sum of $4,500 in child support to Samantha.

They Divorced As A Result Of Irreconcilable Differences 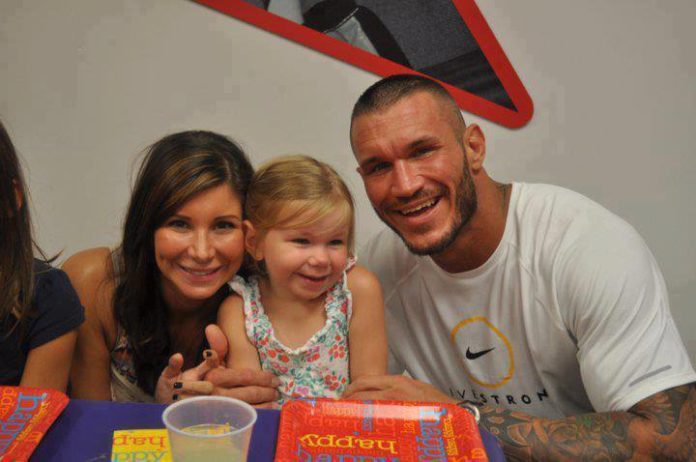 The reason for Samantha Speno and Randy Orton’s divorce is not clear. However, it has been put down to ‘irreconcilable differences.’ However, during an interview, Samantha revealed that one of the major reasons why things stopped working for herself and Randy was his work schedule. According to her, he always spent so much time at work and did not give their marriage and their daughter as much time.

Notwithstanding, their divorce was not messy, and both of them are not at loggerheads. Even after their divorce, she still shares pictures of him on social media. There has been no information about her love life after Randy Orton – whether she is getting married to someone else or not, even though the same can’t be said of the American wrestler. He is currently married to Kimberly Kessler, and they got married in 2015.

Besides Her Marriage To Randy Orton, Samantha Speno Is A Serial Entrepreneur

Getting married to Randy Orton may have opened some doors for Samantha Speno and has made her famous. However, it is undeniable that she is a hard-working woman who believes in chasing her dreams. Even before meeting the WWE star, she has always been a goal-getter.

Samantha also has an interest in makeup, and she has taken this interest to another level by starting her makeup line. She also has a company called Stellify. It is a styling company that owns blogs where they share tips about styling, fashion, make-up, skincare, and hair care. From being an employee, Samantha Speno has improved and invested so much in herself that she is now an employer of labor. Her team includes photographers, tanning specialists, makeup artists, and stylists.

She is also into interior decoration and works as a custom home consultant at Lambordo Homes. From all her endeavors, Samantha Speno has an estimated net worth between $1 million to $5 million.