10 Most Dangerous Animals You Should Avoid In Africa 10 Most Dangerous Animals in Africa

The Cape Buffalo is a safe bet for number ten. They are credited with killing about 200 people a year – and are said to be the biggest killers of ‘big game hunters’ in the world. An adult male can be more than 700kg (1,540lbs) and even a lion hesitates to attack one on his own. Also, buffalo are usually to be found in large intimidating herds, that will mob any threat to their young. The next most dangerous animal is not so much *in* Africa, so much as swimming alongside it! Number nine is the shark, particularly the Great White Shark, and although shark attacks are rare, they tend to be very serious. This is because the shark charges at its prey at enormous speed, takes one huge chunk out and drags the victim underwater, then just backs off while the victim bleeds to death and becomes dinner. Fortunately attacks only usually happen a couple of dozen times a year in Africa, with less than a quarter of those being fatal. Number eight would be the African Rhinoceros. Both the black rhino and the white rhino are endangered through poaching, but they are also a little bad-tempered and very shortsighted, and will not hesitate to charge at anything they perceive as a threat, attacking and goring with their deadly horns. Since an adult rhino can weigh 6,000lbs (~2,800kg) and can run at up to around 40mph (~64kmh) for short periods, getting in their way (or especially between a mother and her baby) is not a good idea! At number seven is the most dangerous of the big cats – the Lion. Although lions don’t usually attack humans, they will sometimes do so if they are sick or otherwise incapacitated, and once they’ve ‘tried’, they tend to come back for more. These ‘man-eaters’ are then far too dangerous to leave as they are, and either have to be moved to somewhere with no humans within reach, or simply destroyed. In Tanzania and Mozambique particularly, lion attacks on humans seem to be on the rise, and there are several hundred deaths this way every year. The first of the ‘dangerous in a different way’ entries is at number six – the Desert Locust. Although it doesn’t kill humans directly, the devastation caused to crops and property when it swarms is indirectly the cause of many human deaths because there are just so many of them! One Moroccan swarm was recorded at 230km long, 150km wide and containing around 69 billion insects – and it cost around US$2.5 billion in harvest damage.

At number five is a more conventionally dangerous animal – the Nile Crocodile. It hovers underwater, with only its nostrils above the surface, waiting for something to come to the edge to drink, then with a fantastic burst of speed, it launches itself up, grabs its victim in its vice-like jaws and drags them back under the water to drown. Crocodiles are considered to have the strongest bite in the animal kingdom at up to 5,000lbs per square inch, and hundreds of attacks are reported each year in Africa. 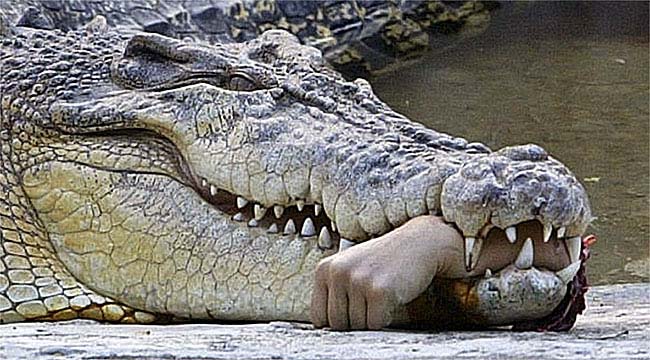 The deadliest snake in Africa is at number four – the Black Mamba. The largest snake in Africa at up to 8ft (2.5m) long, it is not actually black at all (it’s usually a brown or olive colour), but gets its name from the inky black lining of its mouth, which it displays when threatened. They are extremely aggressive, chasing after a hapless victim at up to 12mph (20kmh), and will not hesitate to strike with venom so strong that each strike is enough to kill a dozen men within an hour – and it will strike up to a dozen times in a single attack. Without anti-venom, its bite is always fatal. The biggest land mammal in the world, the African Elephant comes in at number three. At up to 12,000lbs (5,600kg), if it attacks, it can do massive damage, usually by trampling underfoot, and the males especially don’t always need a reason to attack. However, as a threatened species (again due to poaching) it is highly unlikely you’ll come across one except in a protected reserve. Number two on our list is the Hippopotamus, or ‘river horse’, and it causes more human deaths than any other large animal. Contrary to popular belief, hippos cannot actually breathe underwater, but they can hold their breaths for a long time and, being heavier than water, can walk along the bottom as if they were on land. Territorial males and females with babies are the most dangerous and since they can run at 20mph (32kmh) and have 20-inch (51cm) canines in their huge jaws, sensible people stay well out of reach at all times. Believe it or not, the whale is their closest living relative!! And so we come to the number one most dangerous animal in Africa – and it’s one of the smallest. The Mosquito carries malaria, dengue and a number of other diseases which it passes on to humans when it ‘sucks their blood’ – and malaria alone kills over a million African people every year, mostly children under five – that’s nearly 2,800 people A DAY. It’s the female of the ‘Anopheles’ species that does all the damage with regard to malaria – the males and the other 3,499 or so species of mosquito are actually more or less innocent. Quite a list, isn’t it?! It makes you wonder how anyone manages to live to grow old in that continent, with so many deadly creatures lying in wait!