South Africa has always recorded a high rate of tourists visiting to catch a glimpse of the wonders nature has bestowed on the country. A visit to South Africa will expose you to lots of beautiful scenes you have never imagined existed, ranging from the wildlife, weather, vegetation, etc. Even the people of South Africa themselves are so welcoming and cheerful. South Africa is indeed a beautiful country with a broad mixture of people, languages, and cultures.

A number of attractions that include Table Mountain and the capital city of Cape Town are well-known throughout the world. Overseas students who choose to study in South Africa will not find it boring as there are lots of things they can do in their spare time. The warm climate implies that there are plenty of outdoor activities to participate in, including surfing, hang-gliding and searching for lions, tigers, leopards, and cheetahs in one of the country’s many game parks and reserves.

Simply put, there’s no place like South Africa. Here are a few of the beautiful and happy holiday pictures from the country.

South Africa is one place that every golfer can have a great time on the course and at the same time, explore the interesting environment. There are over a hundred golf courses in South Africa where golfers can play their games, making their highest hits while animals like elephants and lions watch. One of the amazing golfer’s paradise is the Garden Route.

This is a stone house that is located on the southern coast of South Africa in Noetzie beach which has been divided into three fabulous unit. It is one of the best relaxation centres for couples who wish to have a nice time together.

Misty mountains of the Magoebaskloof

Located in Limpopo Province is the Misty mountains also known as ‘The Land of the Silver Mist’. It has a clear mountain streams and rivers that will leave you wondering if you are still part of the planet earth. This is an open-pit and underground mine in Kimberley, South Africa. The world’s largest hole excavated by hand. The place has attracted visitors before and after mining operations closed in 1914.

This is one of SA’s finest, hidden gems between the Eastern and the Western Cape. It is a 300-kilometre stretch of the south-western coast which extends from Mossel Bay in the Western Cape to the Storms River in the Eastern Cape. The unrivalled natural beauty lies within the Garden Route belt, providing access to some of the world’s most stunning landscapes. This is one of South Africa’s best holiday resorts. The resort is located at Magaliesburg, West Rand, Gauteng, South Africa. Simply known by the locals as KZN, KwaZulu-Natal is one of South Africa’s provinces with most relaxing, entertaining and inspiring areas. A place where you can explore the country’s green, undulating hills of lush vines, banana plantations and date palms rising from the shores of the warm Indian Ocean. This Castle is located on the southern coast of South Africa. The elegant home is built out of the natural stone found at Noetzie. 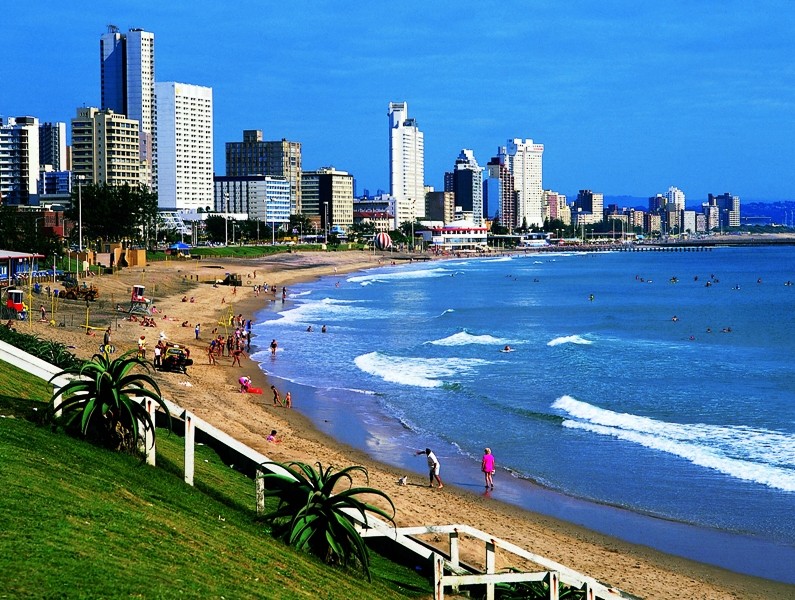 Durban has up to 13 beaches which include the Umdloti Beach, Ansteys Beach, South Beach, Brighton Beach, Cave rock and the Addington Beach, among others. Located in the South African province of KwaZulu-Natal, the city of Durban is mostly referred to as South Africa’s playground.

Wonderful Times on the Back of an Elephant

South Africa is a home to the savanna elephant. You can enjoy your day on the backs of these terrestrial animals in several places like the Addo Elephant Park located in the Sundays River Valley in Greater Addo, the Bela Bela wild-life resort located at the north of Pretoria, the Zebula Golf Estate and the Pilanesberg National Park among many more.

This path runs through the Swartberg mountain range on the R328. The Swartberg Pass is situated in the Klein Karoo (Little Karoo) area of the Western Cape, South Africa. The pass is considered to be one of the most scenic drives in the world. Take a look at the beautiful scenario of the city of Cape Town South Africa. Cape Town is the provincial capital of the Western Cape, the seat for the nation’s National Parliament and above all, it is the home for tourists with scenic vistas. The Cederberg is found in the Cederberg Wilderness Area in Cape Town, South Africa. The amazing rock formations are worth to behold. On the walls of the caves are the signatures of various politicians who held secret meetings here in the 19th and early 20th centuries.

The canopy tour involves zip-lining from one platform to another along a steel cable suspended up to 30 meters above the forest floor. It is the very first of its kind in Africa. Canopy Tours are now available at seven unique locations around South Africa and each zip line adventure takes place in a completely different environment and offers a new experience. Here’s a beautiful ragged-edged mountain range. The 620-mile range of mountains also known as the or uKhahlamba in Zulu is in eastern South Africa and the major portion of the mountain called the “Barrier of Spears” lies in the kingdom of KwaZulu-Natal. Situated at the eastern foot of Table Mountain in Cape Town, the Kirstenbosch Botanical Garden has a large conservatory exhibiting plants from a number of different regions, including savanna, fynbos, karoo and many more. The Wild Coast is one of South Africa’s most remote stretches of shoreline. The coast is a section of the coast of the Eastern Cape, a province of South Africa. Also known as the traditional home for the Xhosa, the region stretches from East London in the south to the border of KwaZulu-Natal in the north.